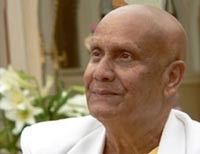 Sri Chinmoy was born in East Bengal, India in 1931. He is one of the most prolific writers in the English language, having authored over 1,550 published books in his lifetime. The purpose of his literature is to guide readers in their journey towards self-discovery and happiness, to elucidate the timeless teachings of spiritual knowledge and to lay out a clear vision for the achievement of world harmony in our time.

Sri Chinmoy moved to New York City in 1964, where he lived until his passing in October 2007. His first book Meditations: food for the soul was published in 1970. Many of Sri Chinmoy’s books originate from his public talks, which were later transcribed into written form. These include lectures from university tours, speeches delivered at the United Nations headquarters, and numerous question-and-answer sessions with his students and members of the public.

As a spiritual master, Sri Chinmoy faced the paradox of using literary expression in order to reveal the “inexpressible” – for the Supreme Truth lies far beyond the reach of words and concepts. Nevertheless, the pen and the tongue have an indisputable power to inspire, to elevate, and to unveil. In his writings, Sri Chinmoy stressed that the realisation of truth can only occur when mental limits are transcended. However, by being presented with high ideals the mind can lift its gaze beyond the domain of the ordinary. To get the most benefit from his writings, Sri Chinmoy recommended reading them ‘with the heart’, so that our intuition, feeling and inner wisdom can also awaken and respond.

Sri Chinmoy stressed that it is not through books alone that one can illumine the mind. In meditation, for example, he preferred to instruct through silence, as it is in the quiet stillness of the mind that the subtle teachings of spirituality can be most effectively transmitted.

Sri Chinmoy’s favourite medium of spiritual writing is poetry. As he puts it:

“I always say that man writes prose, but it is God who writes poetry in and through man”. [1]
- Sri Chinmoy

“In order to write a poem, the poet must transport himself to the sphere of the Muse and lose himself there. He has to be like a flame that burns away everything but itself.” [2].
- Sri Chinmoy

Sri Chinmoy’s repertoire also includes many stories and plays which offer instructive messages about life. They are often based on traditional folk tales. Many of the plays are about famous spiritual figures. The play Siddhartha becomes the Buddha is a commonly dramatised play, and has been quite popular with mainstream audiences.

Sri Chinmoy’s work has been widely commended by scholars, professors and writers worldwide. Awards presented to Sri Chinmoy specifically for his literary achievements include the Gold Medal in Literature from the International Academy of Lutece in Paris and the Literature Award of Excellence (1993), UNSCR Society of Writers, United Nations. He was also presented with numerous honorary degrees for his role in helping to foster world harmony through literary and other means.

[2] Sri Chinmoy, Philosopher-thinkers: the power-towers of the mind and poet-seers: the fragrance-hours of the heart in the West, Agni Press, 1998